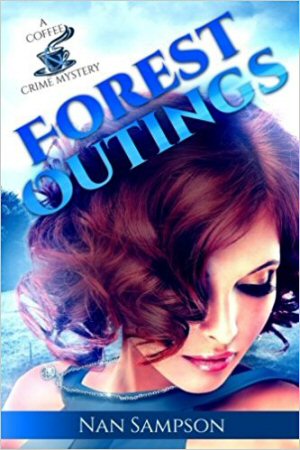 Forest Outings (A Coffee and Crime Mystery) (Volume 3)
author Nan Sampson
Ellie Gooden is just settling in for her first winter in Horizon when Patti and Earl Mough’s young eco-warrior son Josh stops in town with three members of his organization, including media darling and local boy Link Fairweather. Everyone is thrilled to see him but what should be a joyful reunion quickly goes south. It’s clear that Josh’s co-workers are a nest of vipers, and worse, his parents are facing a zoning crisis championed by the Mayor and his pet real estate developer that could cost the Moughs a sizeable portion of their land. Things only get worse when Link Fairweather is found dead in the Mough’s north pasture, with Josh’s winter scarf beneath his body. Josh is immediately arrested and nearly everyone in town thinks Josh is guilty. Everyone except Ellie. It’s up to Ellie to clear Josh of the charges before he’s formally indicted, or her dear friends, the Moughs, could not only lose their business but their eldest son too. With Charlie on hand to help her, Ellie sets out to find the real killer before all hope is lost – or someone else winds up dead. 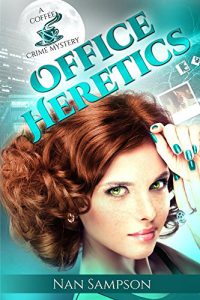 Office Heretics (A Coffee & Crime Mystery) (Vol. 2)
author Nan Sampson
An unwelcome call from Lacey, an old college friend, bodes trouble for Ellie Gooden, long-time Wiccan and proprietor of The Sacred Caff Coffee Shop in Horizon, Wisconsin. Ellie reluctantly agrees to help her friend although it means returning to Chicago, the last place on earth she wants to go. Sure that Lacey is being the grand manipulator and drama queen she’d always been, Ellie drags her feet getting there, only to discover she’s too late. Lacey is dead. Chicago PD insists it was just a random street crime, but Lacey’s ghost, who has attached herself to Ellie, violently disagrees. It’s up to Ellie, her best friend Kate, and ex-cop turned PI, Charlie McCallum, to uncover who killed Lacey and why. As Ellie jumps into the familiar world of sordid office politics at Lacey’s workplace, she unearths secrets that could destroy personal and professional lives. Haunted by her own demons as well as Lacey’s ghost, Ellie is determined to give Lacey the justice her murdered parents never got – and put the ghosts of the past to rest. 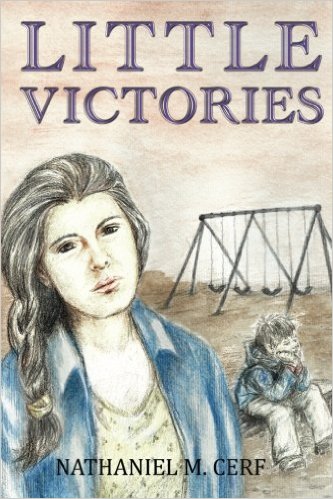 Little Victories author Nathaniel Cerf
Chaos, frustration and spit. Recent college graduate Angela Marengo thinks she knows what she is getting into by taking a job at a children’s mental health center’s elementary school program. Although she has a knack for helping abused kids, she finds the abusers these children still live with are the least of her worries. From a ham-stringed legal system to nearly impotent social services to professional burnout among her overstressed colleagues, Angela discovers that her easy stepping-stone to a graduate degree in psychology is really the great secret travesty of justice for America’s youngest, most voiceless citizens. “Little Victories” exposes the children’s mental health system the way Upton Sinclair’s “The Jungle” exposed the meatpacking industry. A must read for every student of psychology and social work…and every person concerned about the welfare of the nation’s children. 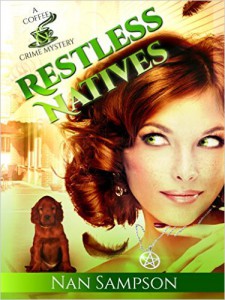 Restless Natives (A Coffee & Crime Mystery) (Vol. 1) author Nan Sampson
The weekend before her coffee shop’s grand opening in the small Wisconsin town of Horizon, former Chicago marketing exec Ellie Gooden opens the back door to her business…and finds murder. The former owner is dead in the middle of her kitchen, tied to a chair, covered in syrup and feathers, with a butcher knife sticking out of his chest. Alone in a new town, she climbs immediately to the top of a suspect list of one. To make matters worse, someone is vandalizing both her new shop and her new home, delaying her opening. As she struggles to launch her new business and salvage her reputation, she digs into the murdered man’s past, unearthing long-buried small town secrets – secrets that have driven someone to kill. And turned Ellie from suspect to potential victim herself.